Here are the covers for some of the books I will be publishing throughout the remainder of 2013 and during 2014. Apart from the following books, there will be another 'Samantha Carter' book (published by Little Brown/Piatkus) in 2014 and the first book in a new series called 'Flashes' (published by Chicken House). When I have covers for those books I will post them here. 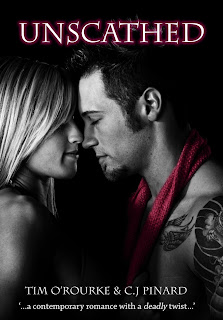 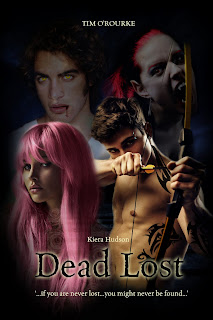 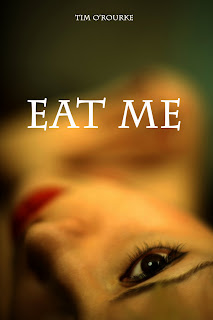 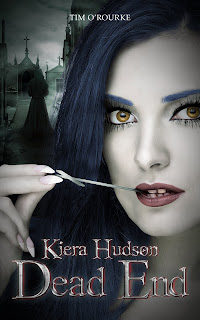 
Coming 2014 and in no particular order! 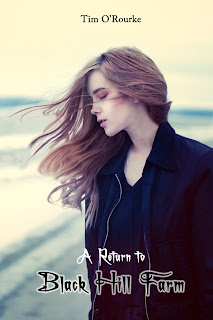 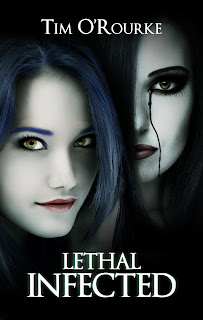 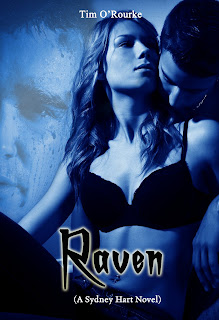 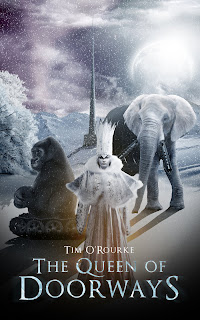 'The Queen of Doorways' (The Doorways Trilogy) Book 3 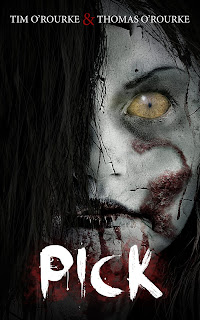 The World Of Kiera Hudson! 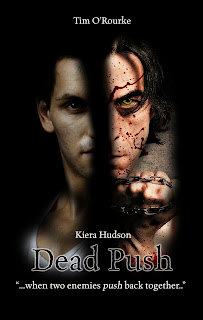 With the recent publication in the last couple of weeks of 'Dead Push' the 7th Kiera Hudson book in series 2, I have now written nearly 900,000 words about Kiera and the world she inhabits. I receive many emails from fans of the series who have noticed little crossovers from Kiera's world and that of worlds mentioned in some of my other series - notably the 'Doorways Trilogy', the two 'Black Hill Farm' books and the Sydney Hart Novels.

If I'm to be honest with the fans, I am writing about more than one world and there are connections between them. There are Doorways between the worlds in my books. Some of the characters pass through these different layers using doorways, trains, holes and wells in the ground and others simple just disappear.

When planning 'Dead Push' I knew I had to start looking back at the series and start pulling together some of the strands as there are only two books left in this current Kiera Hudson Series (Dead Lost and Dead End). It was then that I realised what an intricate web I had created. There are vast and searching connections between many of the characters and the different worlds. My wife suggested that one day I should sit down and write a plan of family tree of sorts about how each and every character is connected. But as I first said, some of these characters from Kiera Hudson's world are connected to characters and events in some of my other series. It wouldn't be just a simple case of making a family tree or map. It would need some kind of book to pull of these threads together.

A book like this would illustrate to all of the fans the many connections and would go someway in answering many of theirs and your questions. It would be a huge and time consuming task but I should imagine great fun. To be honest, I wouldn't have the time to sit back and write such a book and point out all these hooks and hints that I have made throughout the different series of books. Some have been spotted by the hard-core fans and others have been missed. I don't put anything in my books, however small unless it has some meaning or relevance later on in the different series of books. 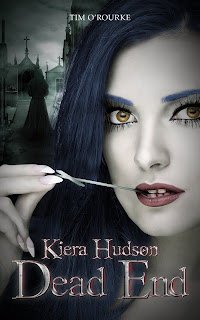 There is only one other person who probably knows the Kiera Hudson world and the many connections to my other books better than me and that is my wife Lynda. So, knowing that I don't have the time to write such a book myself, Lynda has decided to take on the task. The book will be called 'The World of Kiera Hudson' and will published after 'Dead End' which will be the last book in the current series.

If there are any questions that you might have on any of the characters, how they connect, their relationships, then ask below and Lynda will make sure they are covered in the book. If you have any other burning questions about how the different series all link together then just ask, and we'll make sure it is exposed in the book 'The World of Kiera Hudson'. Carles Barrios is designing the cover and hopefully I will be able to post it soon!
Posted by Unknown at 08:37 2 comments:

'Vampire Seeker' Book Trailer. What do you think?

Below is the book trailer for my novel 'Vampire Seeker' (Samantha Carter Series) Book 1. 'Vampire Seeker' was published yesterday (15th August 2013) by Piatkus. Although I have published many titles before this is my first book to be published by a major publisher. This has been an incredibly exciting time for me as for many years I had struggled to get my work noticed by anyone at all. But with the advent of the kindle and other eBook platforms it gave me an opportunity to share my work with others. Working with Anna Boatman and her team at Piatkus, I hope more people will discover the world of Sammy Carter and my other works.


I am soon to start writing the second book in the Samantha Carter Series and I will post regular updates on this blog about how that is going! 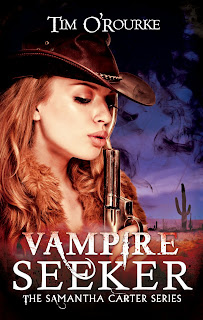 "...And then there is Harry, Harry Turner. I can definitely see why this novel is for adults, as the sexual tension is very hot and intense. If you are looking for a romance theme, or at least the hope of one with a strong and silent type cowboy you will not be disappointed. He is like Clint Eastwood in 'High Plains Drifter', which funnily enough has an almost paranormal feel but not in quite the same way that 'Vampire Seeker' has. Aside from Samantha, Harry is my favourite character that I cannot live without. I am just dying to know just how bad he is. I can honestly say that if the action and gore don't get the blood pumping, Harry certainly will!

I need to read the sequel right now. I cannot wait for the release date!" A Readers Review Blog

"...Tim O'Rourke has ventured into the adult genre with a spectacular entrance. Cowgirls & Vampires is a whole lot of brain gymnastics and fun, not to mention some awesome new characters for us to get to know and enjoy. All I am going to say is chapter 23!!!! I do blush!" Novels On The Run

Samantha Carter believes that a vampire is responsible for the brutal deaths of four women in Whitechapel, London, England. Each murder is identical to those committed a hundred years before by a very different serial killer. Desperate to prove the killer's identity, Samantha follows him onto a late night tube train. But Samantha doesn't reach the next station and finds herself on a very different journey, where she discovers vampires are very real and far more dangerous than she had ever imagined.

To stay alive, Samantha needs to figure out why things have gone so terribly wrong for her - and more importantly, why she is out of time?
Posted by Unknown at 12:13 No comments: 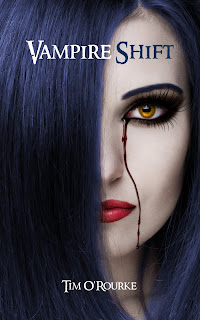 “Vampire Shift will leave you on the edge of your seat, gripping your Kindle.” Paranormal Wasteland Book Reviews

“I recently read an article about Tim O'Rourke and how his books are said to rival Stephanie Meyer's work. The cover alone drew me in and after I began reading, I simply couldn't put the book down.” Abibliophobic Book Reviews

“O'Rourke weaves together a story of horror and romance in this first book of the series, and I cannot wait for the sequel to release. I highly recommend this novel to all readers, both young and old alike. Five stars to this magnificent novel.” Abookvaction Book Reviews

“The entire time while reading this I had goosebumps all over and many times nearly jumped out of my seat with fright. This book is not for the faint of heart I can assure you. Horror fans be warned, you will love this!” Books4Tomorrow Books Reviews

When 20-year-old police recruit Kiera Hudson is posted to the remote town of The Ragged Cove, her life is changed forever. Investigating a series of horrific murders, grave desecrations, and missing persons, Kiera uses her unique ability of seeing, and soon realizes her own life is in danger. When Kiera falls for police officer Luke Bishop, not only are her mind and heart opened to a terrifyingly new world, she comes to suspect that Luke might be involved in the killings. In a race against time to unearth the truth, Kiera must discover the identity of who – or what – is behind the gruesome deaths on her Vampire Shift.

“Vampire Shift” is Book One of The Kiera Hudson Series One.
Posted by Unknown at 12:12 3 comments: 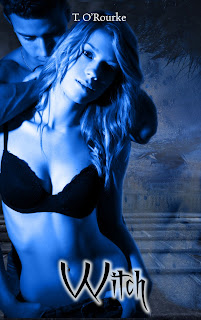 A paranormal romance/thriller with a chilling twist!

“...this novel is fun and flirtatious but frightening and fearsome. Not to mention saucy, sensual and sexy...” A Readers Review Blog Book Reviews

“Do not think you can just read this book... no, you cannot, you will live in it... you will fall into it and be a part of the story.” Delirium.blogspot.com Book Reviews

“All is NEVER what it seems.....When you read a Tim O'Rourke book, then you will understand that sentence.” Novels On The Run Book Reviews.

“What I love about O'Rourke's novels is that, without fail, he always surprises me with his many twists and turns, which is exactly what happens in his latest new adult novel, Witch.” A book Vacation Book Reviews


Twenty-year-old Sydney Hart has always made mistakes and when she meets Michael Grayson, she soon comes to wonder if she hasn’t made the biggest mistake of her life. That one moment of passion between them causes Sydney’s world to spiral rapidly out of control.

Suffering from nightmares, Sydney soon realises her life and the people closest to her aren’t who or what she believed them to be. Fearing she has been cursed, Sydney attempts to unravel the dark secrets that surround her, and is desperate to discover why a dying man called her ‘Witch’. 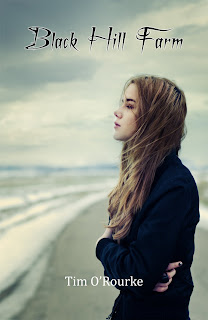 "...I love the way Tim O'Rourke writes, his style is captivating and his characters endearing. This book took me by surprise in every chapter." Delirumblog Book Reviews.

“...Right off the bat I was so engrossed, sucked in to the story that I didn't want to put it down.” Can’t Put It Down Book Reviews

“...I'm still reeling an hour after finishing this novel - this was a superb read...” A Book Vacation Book Reviews

When sixteen year-old Ben McCloud moves to Black Hill Farm, he soon falls in love with the mysterious and seductive Andrea Black.

Finding themselves alone on this remote farm and desperate to stay together, Ben's and Andrea’s world spirals out of control. As they fight for survival, every step they take leads them into an ever darker world of forbidden love and despair.

A dark romance with a deadly twist.

This is a new adult novel recommended for 16 years +.